Headteacher of the Year

London, 20 June 2015: Paul Harris from Curwen Primary School in East London, has taken the ‘Headteacher of the Year’ award at the prestigious 2015 TES Schools Awards. The awards, now in their seventh year, recognise outstanding contributions made by education teams and individuals to help students around the country to succeed, both inside and outside the classroom.

When Paul Harris was appointed headteacher of Curwen Primary and Nursery School in East London in 2006, it was seen as a big risk by the governors. He was a very able teacher but was still in his twenties, and the school – situated in one of the most deprived areas of the country – was on Ofsted’s radar as a cause for concern.

But any doubts were quickly banished. Through skill, dedication and his infectious personality, Harris transformed the school to such a degree that Ofsted judged it outstanding in 2009, just three years after he took over. Harris’ impact was clear, with Ofsted inspectors noting: “The headteacher has a profound influence… [he is] an excellent role model for staff.” 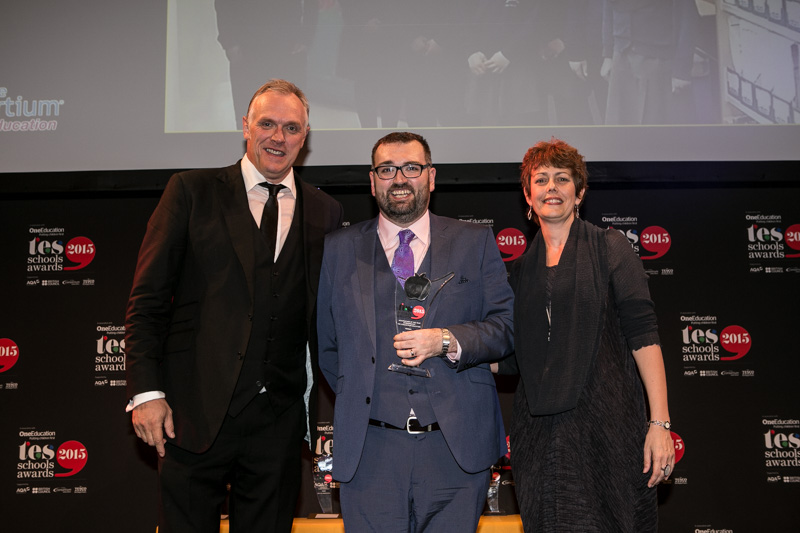 Since then, Paul Harris has built on that success and maintained high attainment: in 2014, 100 per cent of children achieved level 4 in key stage 2 maths tests, 98 per cent in reading and 97 per cent in writing. He has taken his winning formula on the road to help other schools, including Kensington Primary School, where he has become acting headteacher.

According to the chair of governors, Paul is one of the country’s “unsung heroes”. But despite his myriad successes, colleagues say he has remained “modest” with a work ethic that never wavers.

Ann Mroz, Editor, TES, commented: “Paul Harris is a galvanising force in school and community, going beyond his role to support and inspire others.”

Winners attended a black-tie event in at the Grosvenor House Hotel, London, hosted by BAFTA-nominated writer and comedian Greg Davies, where over 1,000 attendees celebrated all that is outstanding in UK education, from the efforts of individual teachers to the work of entire schools.

The winners were chosen by a panel of judges including the writer Anthony Horowitz, Dame Joan McVittie, Headteacher, Woodside High School, London, and Colin Bell, Chief Executive of the Council of British International Schools.